I've been working on getting The Elemental Odyssey ready for Amazon's CreateSpace print on demand service.

What do you think? 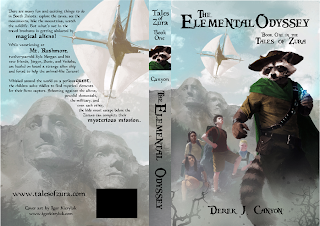 Back on May 9th I raised the price of my book, Dead Dwarves Don’t Dance, back up to $2.99 after keeping it at 99 cents for a couple months.

While it was at 99 cents, it reached a best overall Amazon Kindle sales rank of #333.

It also got up to the top ten for a few lists:


#12 Kindle Store > Kindle eBooks > Genre Fiction > Science Fiction
Since I raised the price, my overall Amazon Kindle sales rank has worsened back to #1507, but it dips back into 900s frequently.


Sales continue to slowly decline and I’ll be interested to see when/if they level out again. In the meanwhile I’m still making more than double in royalties.
Stay tuned to see how it goes.

Pricingexperiment update: raised the price back up to $2.99
Posted by Derek J. Canyon at 12:13 PM 4 comments:

Pricing experiment update: raised the price back up to $2.99 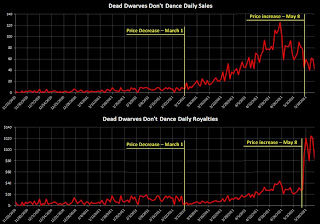 Did I make more money than if I had kept the price at $2.99? Let’s figure that out.
In January and February my royalties increased by about 50% more than the previous months. If we assume that trend had continued in March and April, I would have made about $550 in March and $825 in April and $620 in the first two weeks of May. That means I would have made a total of about $1995 in that time period if I had never lowered my price.
$1994 = Estimated March 1st through May 15th royalties if I had never raised my price.
$1966 = Actual royalties earned, March 1st through May 15th, after lowering price between Mar 1 and May 8.
Wow! That’s pretty darn close. I’ll be real interested to see if I can beat the estimated amount by the end of May. I’ll create a nifty hypothetical versus actual chart at the end of the month to compare.
What these estimates don’t include is the increased sales for my other book: Dead Dwarves, Dirty Deeds. That book rode the coattails of the other book, seeing a bump in sales even though the price stayed the same.  It’s a bit harder to estimate the difference on this one because of its greater sales fluctuations month over month. But, I think I probably made an additional $150 on Dead Dwarves, Dirty Deeds because I lowered the price of Dead Dwarves Don’t Dance.
Was the price decrease a good idea?
If we only look at total royalties earned, it looks like it’s about a wash. I would have earned about the same if I had never lowered my price. However, if my sales continue to top $100/day, then I’ll definitely be earning a lot more. So I’m crossing my fingers.
What’s obvious is that price decreases become an even more powerful tool for every other book you are selling. If I had a few more Dead Dwarves available during the time when I dropped my price on one, I could have sold a lot more books.
What this means for you
Lowering your price seems to be a great way to eventually increase royalties. Yes, you’ll lose money for the short term, but if my numbers hold up, it looks like you’ll be able to recoup those loses within a couple weeks once you raise your price again.

I am way behind in my writing goals for this year.


I have about 3000 words written for the sequel to Dead Dwarves Don’t Dance and 8000 words written for the sequel to The Elemental Odyssey.
Back in February I got a promotion and new responsibilities at work. The new responsibilities are really draining my creative energy. I like my job and the day goes by fast, but I just don’t have the brainpower left after work to sit down and write. Alas!
Stacked on top of that is a bit of writer's block with Dead Dwarves 2. I just can’t get in the writing groove. I’m not sure about the first scene, so that 3k I’ve written might actually get cut later. Sitting down to write cyberpunk is not currently a happy experience.
So I’ve switched to working on the TEO sequel. This one is moving along quicker, I just need to write more. I’m about 10% into the first draft, when I wanted to be 100% by this time.
All this delay means, of course, that I don’t think I’ll hit my goal of two more books this year. Hopefully, I’ll get one done.
In good news, I’m working on getting print versions of Dead Dwarves Don’t Dance and The Elemental Odyssey up on Amazon.
Given that most kids still don’t have ereaders, I think a print version of The Elemental Odyssey will greatly improve sales.
Question: What do you all think is a good price for a 404-page, 6” x 9”, paperback book?
Do you think there would be a significant sales decrease at $19.99 as opposed to $14.99? Or anything in between?
Posted by Derek J. Canyon at 9:38 AM 10 comments:

My wonderful wife scored us tickets to a sneak preview of Thor yesterday - complete with imposing studio security making sure we didn't try to pirate it. We both loved it.

It had action, it had humor, it had great visuals, it even had a bit of romance for the ladies. Best 3D I've seen.

Definitely a must-see at the theater. You don't want to see this on a small screen.

And stay  to see what happens after the credits.
Posted by Derek J. Canyon at 11:28 AM 4 comments: 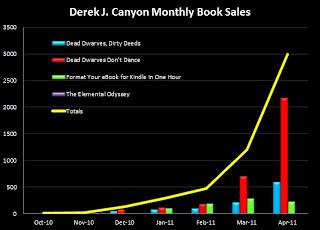 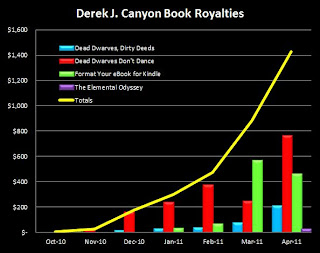 My Dead Dwarves Don’t Dance broke even in April! So far, I’ve spent about $1740 for cover art, editing, and advertising. I’ve now earned $1800 in royalties on it. It took six months, but I’m finally making a profit on the book.

Dead Dwarves, DirtyDeeds has earned $368, but has total expenses of $672, so it still has a way to go to break even.

Format Your eBook forKindle in One Hour had $0 expenses, and has earned $1123. It’s my most profitable book so far.

I just released my YA adventure ebook, The Elemental Odyssey, this month and I’ve done very little promotion for it. It’s only sold a handful of copies. I’m working on using CreateSpace to get a print version available. As soon as it is, I’ll work harder at promoting it.

What this means for me

What this means for you

As an epublisher, you have to invest in your product. It looks like it’s going to take me 8 months to turn a profit. I’d advise anyone trying to emulate my efforts to prepare for at least a year of losses. If you can afford $4000 to invest, I’d say do it! A year later you could start earning profit.

Also, it seems that divergent genres do not help each other in sales. My cyberpunk books have sold over 4400 copies, but my new Young Adult adventure book, The Elemental Odyssey, has sold only 12 copies. Obviously, my cyberpunk fans are not buying the YA novel. So, if you plan on doing disparate genres don’t expect to see a lot of crossover buying.
Posted by Derek J. Canyon at 9:48 AM 16 comments: