Reporter Jeffrey Trachtenberg called me a couple weeks ago for a short 15 minute interview. I actually survived the editor's scalpel and made it into his article: Secrets of Self-Publishing: Success.

Thanks a lot for giving me the opportunity to be in your article, Jeff!

My first year as a self-publisher!

Way back on September 30, 2010, I published Dead Dwarves, Dirty Deeds to Amazon Kindle. Thus began my adventure into digital self-publishing.


Dead Dwarves, Dirty Deeds – 99 cents, 4-star average rating. A trilogy of gritty cyberpunk stories that lead up to the next book…


Dead Dwarves Don’t Dance – 99 cents, 4-star average rating. A gritty cyberpunk story about a genetically engineered dwarf mercenary seeking redemption in 22nd century Atlanta. Lots of action, violence, high-tech and low-life. If you like 1980s action movies, you should like this.


Format Your eBook for Kindle in One Hour – 2.99, 4.5 star average rating. A Do It Yourself book to help you format your ebook as quickly as possible so you can publish to Kindle.


Twelve Worlds –$2.99, 4-star average rating. An anthology of science fiction short stories by 14 new authors. A great deal for $2.99, plus the author royalties go to Reading is Fundamental, the nation’s largest literacy charity.


The Elemental Odyssey – 99 cents, 5-star average rating. A fast-paced action/adventure story about four 12-year-olds who are abducted by magical aliens and taken on a perilous quest around the world. Also available in paperback for $14.99.


I’d have to qualify that as a success. It’s certainly a promising start to a writing career.


Here are some things I’ve learned in this time:


Sales are inexplicable. Why does one book sell more than another? Is it genre, release date, price, cover, blurb, advertising? All of these impact the sales of course, but how do you optimize each for maximum sales? Good question!


Paid advertising doesn’t seem to work. I’ve conducted numerous experiments with paid advertising, spending more than $500 over the past year. Unfortunately, I have not seen any significant increase in sales from these efforts.


Summer slump? As you’ll see below, I’ve had a decline in sales that seems to coincide with the summer months. I don’t know if this is a recurring seasonal event, but I’ll find out next year.


Genres do not cross sell. My cyberpunk books have sold over 9,200 copies. But when I released my young adult action adventure novel, The Elemental Odyssey, it did not get any boost in initial sales from those fans. It seems that cyberpunk fans are not interested in YA action/adventure. Not terribly surprising.


Write books in a series. My two books in the same series (Dead Dwarves, Dirty Deeds and Dead Dwarves Don’t Dance) account for 9,363 of my 11,735 units sold. There is also a direct correlation between sales spikes and slumps between these books. This tells me that one strategy is to only write books in a series so that you can maximize sales.


Diversify genres? I wrote my young adult action adventure novel, The Elemental Odyssey, to diversify and try to capitalize on the Harry Potter fans out there. I think I may have been premature with this effort, as sales have not progressed as well as my cyberpunk books. This could be because not many kids have ereaders yet. This will probably change this Christmas as Amazon Kindle and B&N Nook are now under $100. Also, the Potter books are releasing soon in e-book format. I expect a LOT of kids to ask for Kindles/Nooks for Christmas, which will greatly increase the e-audience for my YA books. I’ll have the sequel, Where Magic Reigns, published in December, which puts me in a good position for the holiday season. I’m crossing my fingers and hoping that this strategy will work.


Write more. Unfortunately, my day job as a technical writer consumes a lot of my brain power. I often do not have the energy to come home and write even more. This is unfortunate, as it is plain that the more books an author has available, the more they cross sell each other. If I wrote fiction full time, I think I could publish 3-4 novels per year. As it is, I expect that I can publish 1-2 novels per year. Unless one of my books really takes off, it’ll take me 5 or so years to build up a portfolio large enough to start considering full-time novel-writing.


Now for my charts: 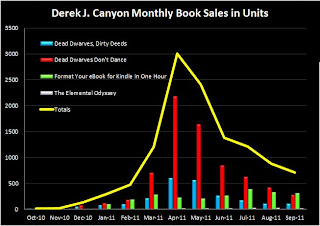 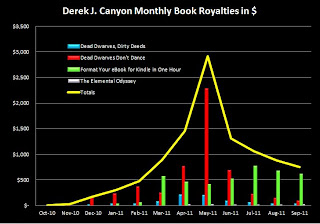 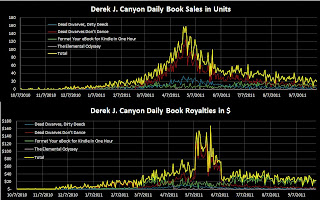 The rate of my sales decline is slowing, which is a relief. I hope that is an omen of things to come for my other books.


I’m expecting an uptick in sales over the holiday season. Hopefully...
Posted by Derek J. Canyon at 7:04 PM 17 comments: