I just created a deviantart account and uploaded some of Igor's artwork, including a 1600x999 wallpaper of the cover of Dead Dwarves Don't Dance. Check it out here. 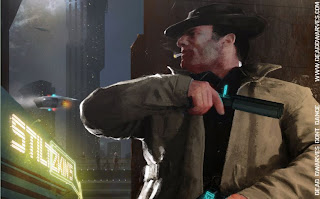 The keys to epublishing success 2012

Last year I blogged about the keys to epublishing success and there was lots of interest in my analysis. So, I thought I do another post about it this year.


This time, my data consists of 78 epublishing authors who have sold more than 50,000 ebooks. This accounts for more than 16 million ebook sales (claimed by the authors).
Selling 50,000 ebooks can give you a nice income, depending on your cover price. If you sell at $2.99, your 70% royalty would get you over $100,000. That's some real dough!
I based this data on the list created over on Self-Publishing Success Stories, a blog which frequently has interesting and enlightening posts. You should check them out. I also researched the authors' Kindle books on Amazon to come up with the following data points:

I then put all this data into a nifty Excel spreadsheet and generated some charts and graphs. Which you can see below.

Disclaimers: This data is not complete. I only have data for authors who have publicly claimed 50,000+ sales. There are no doubt more authors who have that many sales but don't publicize it. So, consider this analysis a subset of the actual data. As such, my analysis should be taken with a grain of salt.


Also, these sales numbers are as claimed by the author. I have no way to verify these numbers. 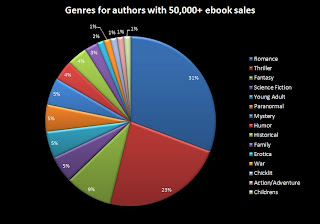 Anything interesting in this chart? Well, first of all, romance has eaten up a larger piece of the pie, going from 16% last year to 31% this year. Thrillers went from 12% to 23%. That's 54% of the pie for those two genres!


Even so, the top sellers pretty much remained the same.


But what's more telling (though not surprising) is that number of titles is even more important for the 50,000 club. 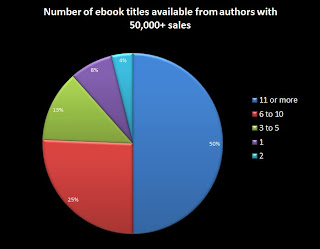 
Only 12% of those authors have only 1 or 2 titles available.


So, once again, the same as last year, it seems that the keys to epublishing success are:


o, get to writing, authors! 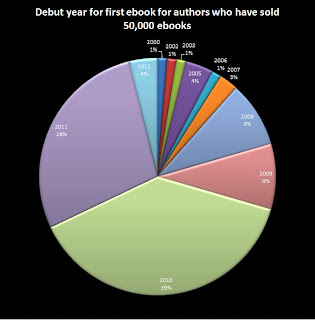 As you can see in the chart, of the 78 authors who have sold 50,000 or more ebooks, 71% started their ebook publishing in 2010 or later. Obviously, epublishing opportunities are flourishing. 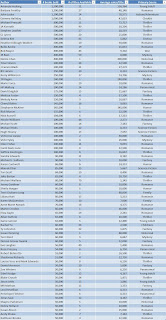 My wife and I went to the Emerald City Comicon this past weekend in Seattle. I commissioned a few sketches of Bozabrozy, from The Elemental Odyssey, by some cool artists. We saw a lot of nerds (like me) and quite a few costumes. The 501st were there, of course, and a trooper arrested Shari, as you can see below.

We also got autographs from a few celebrities (Wil Wheaton, Christopher Judge, Jason Momoa, James & Oliver Phelps, and Eddie McClintock), who were all most kind and gracious. Eddie McClintock from Warehouse 13 was totally into the event, wooting at other celebs' entrances and working to make sure everyone had a good time. He did a short Farnsworth message for someone's Farnsworth emulator on their smartphone. How cool is that? And he designed his own W13 tshirt!

Here are some images: 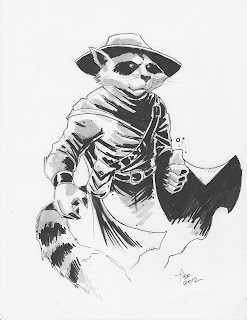 Bozabrozy - a quick sketch by Tony Dela Cruz of The Sketch Crew. Tony is a local Seattle comic book artist. He created this sketch of Bozabrozy in less than an hour. Awesome work! 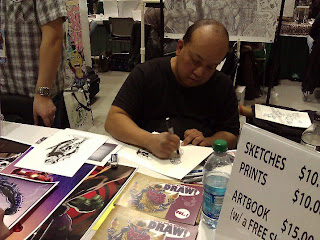 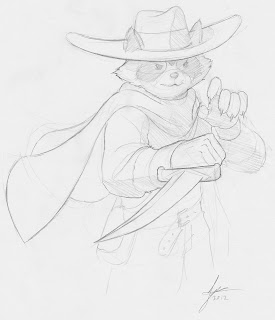 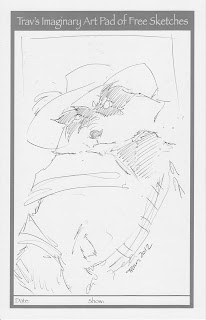 A quick sketch by Travis Hanson that he did literally in 1 minute. And for free! Travis writes a cool webcomic called The Bean, about a kid who finds a sick sword that he seeks to cure. I really like the artwork and he's won some awards for it. You should check it out (sample below:) 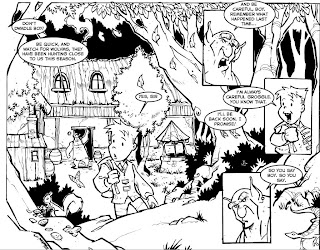 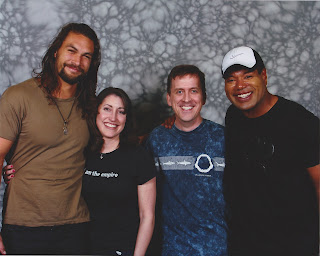 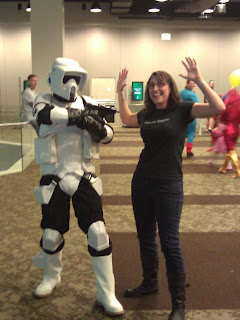 Shari is apprehended by a trooper. 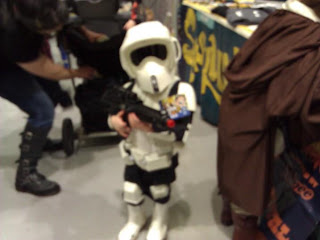 The Empire is recruiting from daycare, apparently. 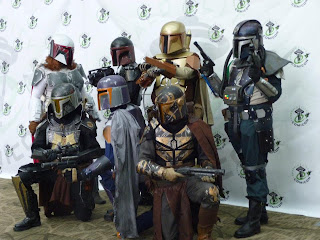 A mob of Mandalorians.