May was my eighth month selling ebooks. 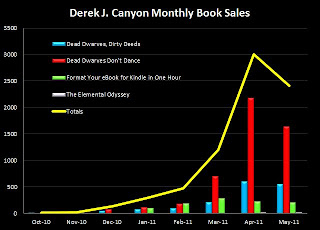 I sold 2406 units of 4 different titles in May. That is a decrease of 20% from April’s sales of 3009 units. Sales for my 3 biggest selling titles declined. :(
My average sales per day were 100.3 in April and 77.6 in May.
Well, that doesn’t sound good at all, does it? But that’s only one part of the story. The other part is my royalties, which increased dramatically: 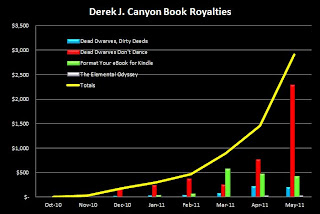 My royalties increased from $1454 in April to $2913 in May. That’s an increase of 100%.
This was because of my price increase for Dead Dwarves Don’t Dance. On May 9th, I raised the price for this ebook from 99 cents to $2.99. This change reduced the sales of the novel, and I think also hurt the sales of my related anthology, Dead Dwarves, Dirty Deeds. The anthology rode the coattails of the novel on the way up in sales numbers, but also rode the coattails on the way down. Even so, total royalties increased for the month.
Thanks to the surge in royalties from Dead Dwarves Don’t Dance, I’ve now made more money than I’ve spent on epublishing. I’ve spent about $4100, but I’ve earned royalties of $6200. That’s about $2100 in profit!
If sales continue at a similar pace, I’m hoping to earn at least $15000 in gross royalties for 2012. That’s pretty good for my first year, and much more than the $3000 I was hoping to make when I started this adventure.
In the daily royalty chart below, you can really see the dramatic increase in royalties in May. For the last several days, though, there has been dramatic fluctuation. I’ll be interested to see if that calms down or continues.

I’ll keep the novel at the higher price throughout June to see how much sales continue to decline, or maybe they’ll level out. I don’t really have any guess about that yet. But, I’ll lower the price back down to 99 cents in July.
Stay tuned!
Posted by Derek J. Canyon at 10:52 PM


Good Reads by Other Authors